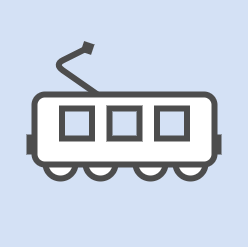 Quicker with a Sticker

Fast, reliable and secure verification of tickets over large distances via digital stickers. Supported by BLE beacons for quicker access and a fallback to QR Codes for high availability.

Therefore we just need a fast and reliable system to check whether the previous electronic verification has been successfully done or not.

This is where the stickers come into play: Every ticket inspector group gets assigned a random sticker. This can be for example a little animated image of a cute comic dog.

When the user app detects one of the BLE beacons it starts the verification process using the beacon id via the backend and, if successful, displays the sticker on the screen.

Then this sticker can be shown to the ticket inspector as proof of a valid ticket.

Even if someone captures all the used stickers, they only have one try to get the right one if they get inspected.

As a fallback a notification is shown which provides quick access to the valid ticket, where a QR code can be scanned to validate it.

All three of us went to the same IT HTL class, then we parted ways:

Lukas and Jakob started studying business informatics and currently doing their master's in AI. Both Lukas (part-time) and Simon (full time) started to work at Cloudflight GmbH (at that time still called Catalysts) as full-stack software developers. Jakob worked at Accenture and decided to focus fully on his studies.

During the implementation, Jakob and Lukas will lie their focus on app development. Simon will be responsible for the Backend Ticket verification. We all together will work on the video. But nevertheless, we are one team and will support each other as well as possible.