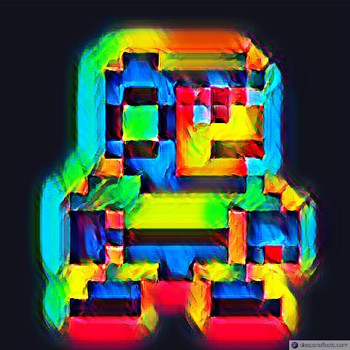 Welcome to Imaginary Worlds where the viewer is given a multi-dimensional journey into mysterious and ambiguous varieties of images. Buckle up your seatbelt and join me on the journey!

Welcome to Imaginary Worlds where the viewer is given a multi-dimensional journey into mysterious and ambiguous varieties of images. It is a collection of 50 different worlds each with 10 images to tell the story of that particular universe. The scarcity of the collection will give the individual images more value. The pictures may speak for themselves.

The value of holding the artwork comes with certain perks such as occasional airdrops of artworks and the possibility of getting a painting of the user-owned NFT. As the project evolves, the release of possible sister collections is possible. The idea of this collection is to connect the art world and NFTs into one. Join me on the journey and let your child-like imagination flow through your mind once again!

The idea of the collection:

The idea for the collection popped into my head when I was passing through a children’s playground. How can these cute little toddlers find excitement from such small things? Numerous reasons may play a role, but one of those things is definitely a broad imagination with no boundaries. It seems that for us adults it is harder and harder to get excited about the things we do in our everyday life. The constant stress we endure by going to school or work or the significant other that keeps bugging you about the little things, the burden to support and provide for your family, or the hectic scheduled lifestyle we live, are all the reasons that suppress you from using your imagination to escape from the depths of the modern life.

As a solution to this problem, I present to you the collection of Imaginary Worlds. The imaginary World is a place where one can let go of all their restrictions and let the child-like imagination and enthusiasm flow through your body as you take a glance at the wonderful images of the multiverse. Buckle up your seatbelt and leave your worries behind as you step into the playground of the adults, to the Imaginary World!

The framework of the project:

The collection is a set of abstract images created with the help of photography and digital image manipulation. The Imaginary Worlds gives a broad, but limited look at the different aspects of our imagination as it has a total supply of 500 images. The total supply is divided into 50 categories referred to as Worlds, which means that under each of those categories 10 unique images are telling the story of that particular World. Unlike in most NFT projects, there is no rarity ranking, meaning that each image is equally rare and unique. The viewer may determine, which images touch and draw the most attention. Also, the images have not been constructed from layers as is in most NFT projects. The images in a certain World have an affinity to the other artworks in that same World, however, each of those images are unique in their own way and they are separable from the other images.

Utility of owning a NFT:

As mentioned earlier, the utility of holding a certain artwork comes with perks. As in most other projects, this project will also reward the NFT owners with occasional airdrops of new and unique artworks. I think this is a fairly decent way to keep the community excited and add utility to the project. Maybe the most interesting feature of the collection is the possibility of owning a physical painting of the user-owned NFT. This is a very unique feature in the NFT world and I have not gotten to know a project that has this element built-in. The previously mentioned aspect is my way of connecting the art world and the NFTs into one. You get the benefits of both worlds at the same time! The possibilities of adding utility to the project are endless such as adding an art gallery to the collection webpage, which enables users to show off their artwork, opening a merch store, minting a sister collection, add the option for the user to create a story to their own NFT to express their feelings about the image, creating a small-time game and giving a small percentage of the NFT sales back to the community. These are just some of the things I have been thinking about from which a few are easier to implement while others include more effort and know-how.

Background of the creator:

I have been an art fanatic for as long as I can remember. Drawing, photographing, and digital art creation have been my passion during my adulthood. Most of my recent work has been focused on digital art and photograph manipulation, which brings us to NFTs. I discovered NFTs a year and a half ago and have been blown away by them ever since. I have been entitled to experience the pros of the NFTs such as community spirit, excitement, unique ownership of the artworks, and the immutable blockchain technology, which has enabled the NFTs to flourish. However, I have also experienced the flip side of the field including the numerous rug pulls, and the scammers claiming to help you with good intentions. By having experienced the ups and downs of the NFTs, I have the knowledge to step into the NFT world as a creator. If you decide to vote on my project, you are guaranteed a dedicated, motivated, and passionate project owner who strives to evolve the collection every day.

Allocation of the prize money:

This was something I had to think about for a while because I want to allocate the prize money as efficiently as possible in order to get this project a flying start. The creation of the collection webpage and adding the possibility to order the physical paintings of the NFTs are the most time-consuming things that have to be done at first. Also, the moderation of the social media might come burdensome if the project starts to succeed so I might have to get someone to oversee the social media sites. As the project grows, the time I would spend on the project grows proportionally, which is something I must take into account when allocating the prize money. Also, some of the money goes into developing new features, which were discussed in the previous chapter, for the collection. The initial plan to allocate the prize money in two scenarios: the top five and the first is shown below. The plan has been calculated using a price of TLOS as 0,3 euros.

It was around two years ago when I discovered Telos for the first time. For the last year, I have also been an investor, which has drawn me closer to the community. The time I have spent investigating the project has reinforced my trust in Telos and in the people developing the project. It is an interesting opportunity to be a part of this journey as a NFT artist. Also, what I have learned from the few NFTs I have minted on Telos, the costs of minting are ridiculously low compared to chains. These are some of the reasons why I decided to participate in the competition and build on Telos.

Check out and support my social media accounts: