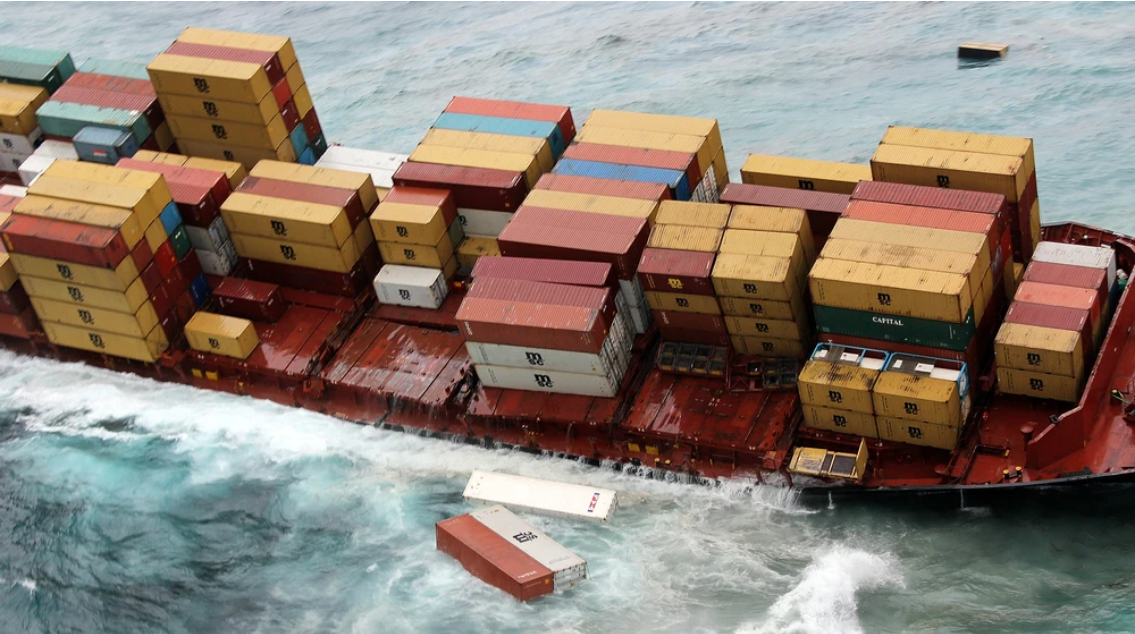 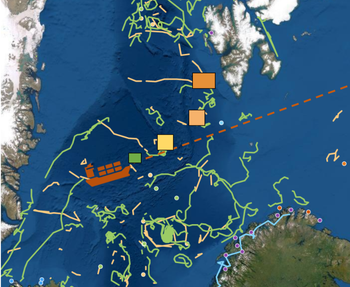 A decision support tool for rescue and salvage operations

As the marine traffic in the Arctic increases, we expect that the amount of objects dropped into the Arctic will increase proportionally. Ships navigating in the sea can lose crew, cargo, oil, but also trash, all of which ends up in the sea.

In case of crew overboard, the procedure is well-established; large ships, although unable to stop or turn fast enough to save someone in the sea, are required to carry a recovery boat.

Every year, more than a thousand marine containers are declared lost in voyage; many more are lost, but not declared until the ship reaches port. It is only mandatory to report dropped cargo if it contains hazardous materials or dangerous goods. For this reason, the bulk of containers are only declared lost when they are (not) counted at port during offloading. A container in sea is valuable to find, but also dangerous to encounter - it can remain afloat for two months and presents a serious hazard to ships navigating in common waterways.

The frequency of oil spills is decreasing, but still far from the ideal zero. Every year, there are approximately two large (>700 t) oil spills, and more small ones that simply don't make the news. An oil spill spells disaster for everything and everyone involved. It is deadly for marine life and costly to clean up. The spiller, but also the local governments end up paying roughly $2B-7B dollars to clean up one oil spill.

There are few areas in the world where spilling trash and waste water into the sea is heavily regulated. The Arctic is not one of them. What's more, once the trash has found its way into the sea, there are no official efforts to track or clean it. Instead, this task is left to some startups, who despite initial success still have a monumental task ahead of them. None of them operate in the Arctic.

The first step towards a truly clean sea is to make sure we know exactly what we spill into the sea, and where is it right now. This last question is what we help companies with.

From just two inputs - ship ID and time of spill - we provide a real-time location estimate of whatever was dropped.

For a person lost at sea, the speed of the response must be measured in the minutes, especially in the Arctic where without protective gear, it is impossible to survive even for an hour in the water. The user in this case is the ship master, who uses the location estimate to choose and perform the crew-recovery manoeuver with the ship. The customer is the shipping company, who wants to prevent the loss of life onboard.

The cost of an oil spill is very dependent of the speed of the response; the sooner a spill is contained by booms, the less area is affected, the less oil recovery vessels need to be mobilized, the easier it is to collect oil into the container bags, and the less marine life needs special treatment because it has come into contact with the oil. Predicting the time-dependent size, and possibly the border outline, of an oil spill is crucial for mobilizing oil response vessels so they contain the most important parts of the oil spill first. Our users in this case are the crisis response teams who tackle the disaster. The customers, however, are the responsible parties who want to minimize the cost of the whole operation. This includes primarily the company causing the oil spill. In many jurisdictions, however, their liability is limited, so local governments end up financing a large amount of the operations, and thus are very interested in limiting it as much and as fast as possible.

There are several financial incentives to keep track of lost containers that drift in the sea. First, the cargo might be valuable, with a single 40-ft container ranging from $10,000 to $1,000,000 in content. If the cargo is dangerous of hazardous, the company that dropped it is liable for collecting all of it, which can be a costly operation if the location is unclear. Third, other ships navigating in the same waterway are in danger of collision with the floating containers. Being aware of the trajectory of the containers can greatly help to manage this risk.

How we do it

No, but actually how

Although our dream is to see a trash-free sea, the actual business model focuses on limiting liability and expenses for companies who have to deal with spills in the Arctic.

Whether our customer is

our value proposition is similar. In the very first hours of a potential incident, we provide information that can give them the best possible headstart to tackling the problem. Although the value offer has some overlap, the use cases do have differences.

As a primary market, we identify the customers interested in managing oil spills. The market is made up of oil-shipping companies and coastal governments near the shipping routes. Whenever an oil spill happens, both of them are responsible for paying the clean-up costs. The costs include the initial response expenses, but also any subsequent damage claims from everyone affected. Crude oil and its products spread at a very fast velocity on the sea surface. Fast operational information about the exact extent of the oil spill helps avert hundreds of square kilometres of oil coverage, preventing the need for all the tasks that go along with cleaning it.

While the financial consequence of an oil spill and potential gain from using our service is high, the frequency of occurrence is low. For this reason, oil-response (and crew-overboard) markets are offered a per-use price. The price is determined by the cost of our everyday predictive preparation, and the potential savings for the customer.

Two hours after an accident on an BigOil, Inc. tanker near Svalbard, the authorities get a notification. As the authorities gather the crew for oil recovery vessels, they send us a request to provide them with real-time estimates of the oil spill extent. This is according to a prior agreement we had made with BigOil, Inc. and the Norwegian Coastal Administration. We send them 15-minute updates, as well as one prediction four hours into the future, which is the estimated time of arrival of the oil recovery boats. Two hours into the process, a Sentinel SAR image becomes available and is immediately shared with the crisis management center in Tromsø.

There are two ice fields on either side of the oil tanker, but we predict that the spill will hit one of them first due to drift. The oil recovery vessels are sent there first, to avoid oil from contacting the ice. As the recovery booms are set up, all the oil is being contained and it is easy to collect it from open water. A very costly part of the oil recovery has been prevented.

For the duration of the first half of the operation, we continue to provide alerts. After some time, on-site information becomes good enough and our part is done. We send an invoice to both BigOil and the Coastal Administration.

As a secondary market, we offer a subscription-based service to customers who are interested in floating containers at sea. The occurrence of floating containers in the sea is high. The customers benefit from real-time data the most if they have constant access. For example, cargo ship operators may see the benefit in frequent alerts about obstacles on waterways. Similarly, a cargo recovery company operating a lift-equipped vessel would benefit a lot from our location service. They, in turn, provide a service to the freight companies that lose containers at sea. In case of a hazardous cargo loss, however, a shipping company could either use our one-off service to manage the (law-mandated) recovery, or choose to have a subscription in case they carry hazardous materials often.

Passionate about the sea and its contents

Excited about connecting the Arctic

Knowledgeable about shipping and everything adjacent