A bounty is the process of an exchange between two parties. Simply put, bounties reward a task completed by developers.

When it comes to web3, bounties are rewards given in exchange for specialized work, like devs, and are typically in the form of tokens.

A Web3 bounty is an excellent choice for blockchain projects, such as DAOs or DeFi, and for professionals.

Because experts, such as blockchain developers, are still scarce, bounties have emerged as a way to recognize specialists in a manner similar to a ”freelance model”,  despite the fact that they are rewarded in tokens for the completed tasks.

A web3 bounty can take any form, but they typically relate to problems and features on a project's backlog.

To address these issues, organizations can use bounties to outsource development rather than hiring a large staff. 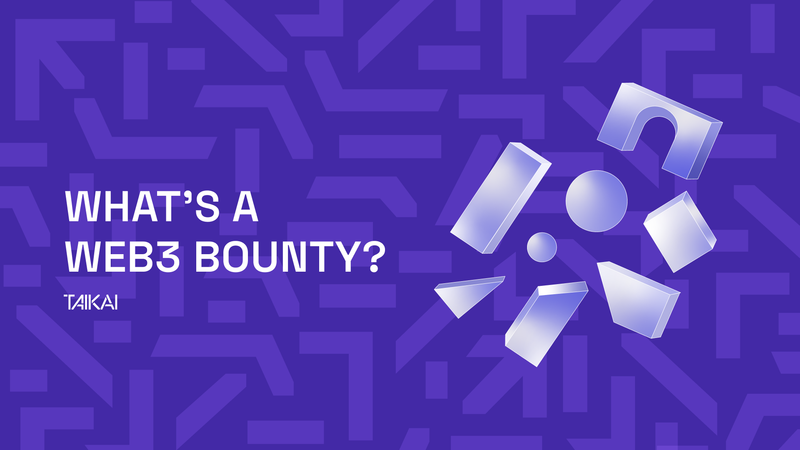 Why do web3 bounties matter?

Bounties are, after all, part of the web3 work culture. There is also a "name" for people who seek to provide services in exchange for tokens: bounty hunters.

These professionals are constantly on the lookout for tokenized incentives.

So, to make things easier for organizations, Bepro’s bounty network, for example, allows companies, DAOs, and protocols to pay out bounties in the form of their own tokens, ETH, stablecoins like USDC, or other ERC-20 tokens.

There are numerous examples, such as bug bounty programs, bounties for reviewing smart contracts, and so on. Let’s understand a bit more about these opportunities:

Before projects are released, developers and researchers search for bugs and are rewarded for each bug found. The reward may vary depending on the security level of the bug. A critical-level bug will pay a bigger prize rather than a low-level one.

Organizations publish a smart contract code for developers to review and identify flaws.

👉 Want more details? We thoroughly investigated all of these bountiful ideas for organizations to accelerate development

Launching a bounty program will attract talent from around the world to help you test a web3 platform, review a smart contract, or find bugs.

On the other hand, bounties are a place for qualified professionals to be on the web frontline earning tokens without reporting to a boss. In other words, it's a method of bringing talent closer to your projects by responding to complex demands without hiring a new employee.

Furthermore, a web3 bounty network is also a low-risk learning curve for anyone looking to transition from a web2 to a web3 environment.

While bounty programs attract talent, they also help organizations save money in a variety of ways.

Another significant cost saving is related to cybersecurity. You will be less vulnerable if you create a web3 bounty to review a smart contract or to promote tests (for example, with a bug bounty).

In other words, you are preventing cybersecurity incidents in your organization. It follows that even the most expensive bounties are frequently significantly less expensive than data breaches.

When a web3 bounty program is designed to encourage developers to conduct tests, they have the opportunity to improve the quality of the product, service, platforms, or system on a daily basis.

It means that bounties offered to developers and researchers who consistently report bugs, for example, are an opportunity to reduce high-frequency functional bugs before significant damages harm the system or, worse, harm users.

As a result, a company that tests, finds, reports, and fixes vulnerabilities on a regular basis is less likely to be attacked by malicious individuals.

A web3 bounty can help (or be the starting point) for blockchain projects to gain community credibility. This is also helpful in attracting investors and VCs to projects and DAOs.

If you are a web3 entrepreneur or a web3 investor, following and engaging in hot web3 topics on Twitter and on Discord communities is a great way to generate buzz for your project.

Because these networks host the largest and best blockchain debates, there is a good chance that you will find blockchain developers and experts to join your bounty program and provide feedback.

Web3 bounties are also a good way for professionals to start building their reputation and, of course, experience.

Thus, if you are a software developer looking to become a blockchain developer, completing multiple bounties can help you build your portfolio and land a full-time job in this field.

Payment methods and the use of tokens

Payment with crypto tokens is one of the many game changers when it comes to web3 bounties.

When an organization sets the reward for a bounty, it will always pay the same amount when the issue is finished. This means that when it comes to web3 bounties, there is no cheaper labor than another.

This enables a truly global economy, whether a person is in the United States, Thailand, India, Brazil, or Mars.

It is also fair for organizations because web3 bounties have flexible pricing to accommodate a variety of budgets. There is no minimum price to open a task, and only those who are interested will try to solve your problem.

The market will eventually regulate itself, based on supply and demand, but the ability to pay with your own token is another highly praised factor to consider.

Furthermore, bounties clarify the game's rules, give that a web3 bounty:

Bepro Network's platform was created for bounties, and it includes everything you need to maximize your company's growth.

Bepro acts as a payment and curation layer for GitHub repositories, requiring only this specific source code and file hosting site to handle bounty requests. To use the bounty platform, you must also have a MetaMask wallet connected and follow three simple steps:

To sum it up

Organizations, DAOs, and all sorts of web3 projects promote Web3 bounties with the goal of solving specific issues.

There are numerous examples of bounties, with bug bounties being the most common. Other examples of developer bounties include smart contracts review, new feature development, and GitHub Repository Bounties.

These rewards are typically paid in tokens, which can be native tokens, stablecoins such as USDC, ERC-20 tokens, or simply ETH.

Whether you are a developer or part of a project or organization, you can join or launch bounties through Bepro Network.

A Hackathon NPS (Net Promoter Score) is a great tool to gauge the success of your hackathon by leveraging feedback from attendees and improving future events.

Get a sneak peak at the most exciting web3 events and conferences of 2023.
See all