BEPRO Network has completed the distribution of 30M BEPRO tokens and a significant amount of MOVR to 3,000 developers who successfully on-boarded to the Network. Those developers who onboarded to our Testnet released back in September (3.8k git users, to be more precise) and passed the screening process have been awarded. To add to this, we have also sent 0.01 $MOVR to each developer for them to use on the protocol. 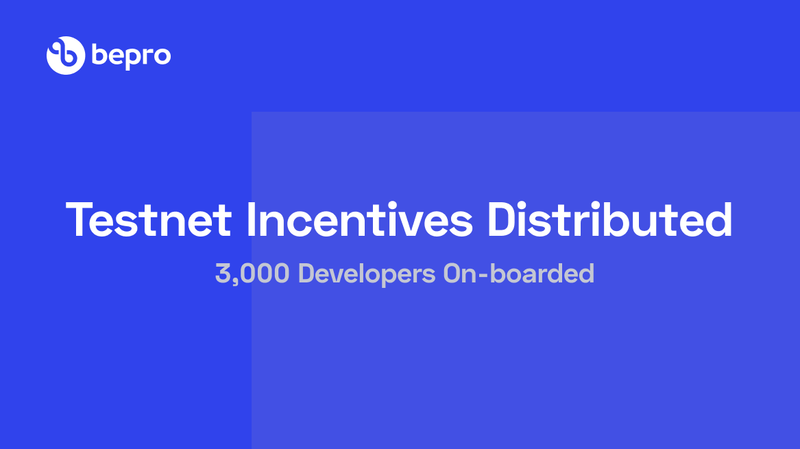 If you haven’t already joined our Telegram and Twitter, click here to join the conversation! Please also read this article for more information about the launch of BEPRO Network Mainnet on Moonriver, Code as a Service Protocol.

Back in September, a week after releasing the Network & Testnet, we announced an incentive to onboard and get more builders and developers using the testnet and its functionalities to gather as much feedback as possible. The main goal of BEPRO Network is to bring users a fully decentralized marketplace and protocol aiming to create a trust-less bridge between Operators and Developers.

As mentioned in the article, we were gathering developers and builders and incentivizing them with a starting 10,000 $BEPRO tokens, while supplies lasted. This testnet bounty was limited to 15M BEPRO so only the first 1,500 members were accepted for the bounty. Unfortunately, some members didn’t get the bounty as we had over 3,800 registrations.

We are happy to announce that we have expanded this program to include all 3,000 developers who passed the screening and on-boarding process. These incentives have already been distributed.

Who has received the incentive?

We had 3,800 applicants, but only 3,000 developers were eligible by passing all the required steps. Each eligible developer has received:

We are aware that a small number of developers were rewarded more tokens than supposed to in this program, due to a bug in the reward distribution system. This bug has since been fixed, and those lucky recipients get to keep their extra rewards. Congratulations!

Stay up to date by joining our Discord Server.