Bepro Network Labs is thrilled to announce it has been acquired by TAIKAI! This acquisition maintains both brands while expanding blockchain solutions to enterprises and increasing the portfolio of operators and programmers. It is the biggest evolution for both companies to date, and allows Bepro Network’s technology to be exposed to a larger base of enterprises and developers. 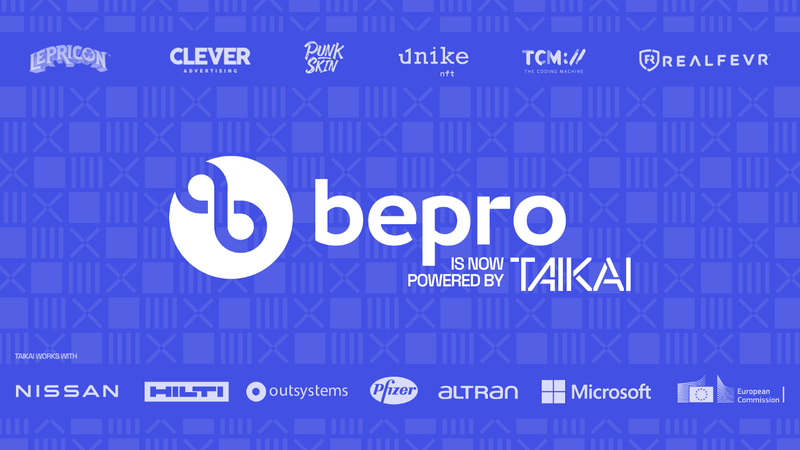 TAIKAI is a Portuguese company that connects enterprises and developers through a unique hackathon platform that offers crypto tokens. It has a network of over 50,000 developers working with some of the largest entities in the world including Pfizer, Nissan, Microsoft, and the European Commission — to develop innovative technologies. They’re one of the fastest-growing hackathons/development companies in Europe, backed by the biggest Portuguese VCs, including Portugal Ventures.

Their vision is to build the largest developer ecosystem hub and network to source and leverage top technology talent worldwide. Bepro Network Labs will now be a key part of that vision.

The reason for the acquisition

TAIKAI’s acquisition of Bepro Network Labs addresses an ever-growing need by enterprises and tech companies to enter web3 and leverage the power of blockchain technology. TAIKAI’s working relationships with large enterprises allow it to help them innovate and bridge into the decentralised world via Bepro Network’s suite of technologies. Bepro and its use-cases will find new demand and enterprise adoption through this acquisition by TAIKAI.

In terms of developer firepower and resources, TAIKAI brings over 50,000 developers, entrepreneurs, and innovators to the table through its network. They will all have new access and new tools thanks to the acquisition and integration of Bepro Network’s existing codebase, libraries, and developer tools. Scaling Bepro Network and increasing its developer and business adoption will now be spearheaded by TAIKAI, and its extensive portfolio of enterprise clients and developer ecosystem.

This acquisition follows TAIKAI’s Series A investment round that happened in September 2021 led by FinLab EOS VC Fund to fuel its international expansion in Europe and Brazil, and the development of hiring solutions for companies and startups. The acquisition of Bepro Network Labs by TAIKAI Network plays a key role in their vision and roadmap to apply blockchain and decentralized systems to the next generation of apps and the internet.

At Bepro Network Labs, over the years we’ve been building web3 products and services for use-cases such as NFTs, tokens, staking, prediction markets, and more. We’ve built out the protocol, the network, and SDKs to grow this ecosystem so that developers across the globe can create decentralized economies in community-driven environments, and help entrepreneurs connect with the right talent for their projects to build tools for the future of Development DAOs.

This acquisition is a step forward in Bepro Network’s mission to bring the best web3 products and services to the world, while helping enterprises transition to this new technology paradigm through the solutions we have built, and will continuously build together alongside TAIKAI Network.

The mission is to essentially bridge the gap between web2 and web3 for developers, entrepreneurs, and enterprises!

Bepro Network Labs & TAIKAI join forces to become one single entity with two brands where TAIKAI Network represents centralized onboarding, grants & hackathons, and Bepro Network the future in web3 as a brand of total decentralization for the developer economy.

Bepro’s usage and adoption will get all of TAIKAI’s knowledge and exposure to their web2 enterprises, players, and developers, while its library of technology will find new use cases to grow. This will make TAIKAI the largest contributor to the Bepro ecosystem, allowing the company to respond to growing customer demand and integrate blockchain into its products and services. With this acquisition, Bepro Network Labs’ employees will be integrated into TAIKAI, with the team growing to more than 25 people.

Bepro Network Labs’ employees will be integrated into TAIKAI, as the two business entities are now one (with two separate brands). Bepro Network itself will have more operators, more builders, and more awareness in the web2 world as never before. The Co-Founders of Bepro Network Labs will now transition into support roles at TAIKAI/Bepro, while the current CEO and CTO of TAIKAI will become the new executives. Some other Bepro team members will remain in their core positions, while others will transition to new departments within TAIKAI for further development of both the Bepro & TAIKAI brands.

To sum up, the Bepro Network Labs (the business entity) is now TAIKAI, where Bepro Network remains as a brand and decentralized network powered by TAIKAI. The relationship between TAIKAI and Bepro Network can be thought of as similar to Consensys and Ethereum or Dapper Labs and Flow Blockchain for example. 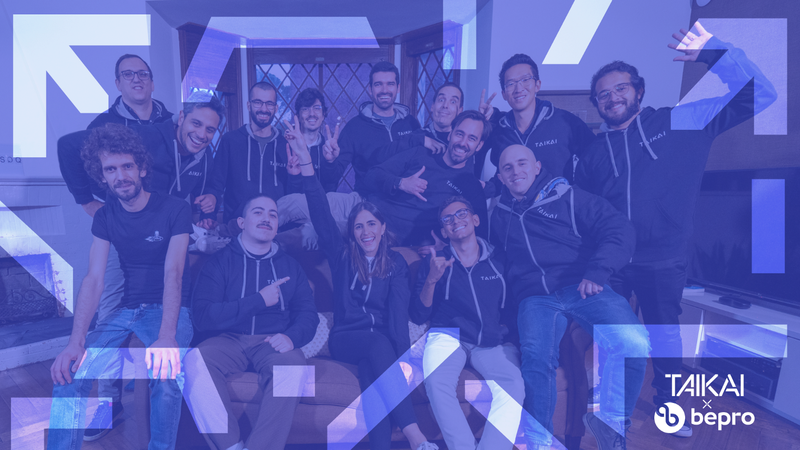 What will change for Bepro Network and $BEPRO tokens?

Bepro Network Labs (the business entity) is now a part of TAIKAI, while Bepro Network (the brand, technology, and token economy) are now empowered and developed by TAIKAI.

$BEPRO, The Protocol, and the Roadmap remain on track, just with the added resources, talent and customers that TAIKAI brings.

The future lives in web3 and blockchain

Finding opportunities, building technology, and bringing people together to make that happen is one of the main roles for Bepro & TAIKAI, but now in both web2 and web3 environments. This will be possible through nonstop technology development, hosting hackathons, and finding solutions to pressing problems. With TAIKAI, Bepro will have a much bigger exposure to enterprises, developers, and demand.

To make it clear to our community and the benefits of this acquisition, we invite everyone to a Meet & Greet that is happening in Discord today starting at 10.15 AM (UTC). Make sure to join and get to know everyone!