You probably have heard about the term Metaverse before. It has a sci-fi feeling about it and it’s certainly one of the biggest fuzzy buzzwords around crypto nowadays. And recently it’s making more and more headlines across the news, especially after Facebook recently announced that they are rebranding themselves to Meta, and are putting a lot of resources in place to become a “Metaverse” company.

Metaverse is probably the most controversial topic we covered so far. There’s no single agreed definition of what it is, while at the same time, everyone in the digital realm has a broad feeling of what it is and what the word represents.

In this article, we will try to briefly cover and explore a more detailed understanding of what the Metaverse is, cover a little bit of what has been happening, and how Blockchain is an important piece of the puzzle for the creation of a true open Metaverse. 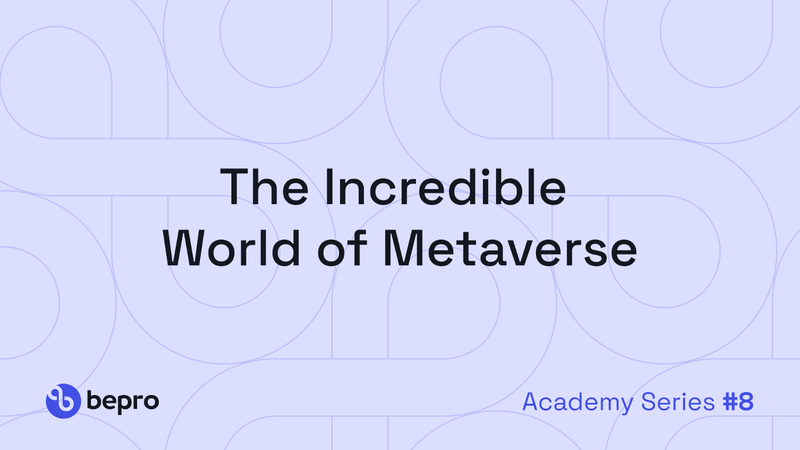 The Metaverse as we see it today

Well, many years have passed since Neal Stephenson’s dystopian novel, and we’re now on the verge of starting to see that reality coming true.

Virtual worlds are nothing really new: you might have heard of Second Life, Fortnite, Minecraft, Sandbox, Roblox, Decentraland, World of Warcraft, and many others. All of these are themselves virtual worlds, with their own mechanics, economies, factions, private clubs, thematic guilds, and so on.

In a broad sense, Metaverse refers to the group of all virtual world environments which people can access via the Internet. It is a term that tries to contain in a single world all the digital and virtual worlds that exist.

All of these disparate and virtual worlds form part of the bigger picture of what we call “The Metaverse”. We can see them as planets or galaxies inside the bigger Universe. That Digital Universe of sparse pieces is the Metaverse. And these virtual worlds could be used for practically anything — work, play, concerts, cinema trips — or just hanging out.

And, much like the original novel, most of these digital worlds envision that you would have some kind of avatar — a pseudonymous representation of yourself — that you use as you like.

To access the metaverse you simply need an Internet connection to enter one of the thousands of applications that make part of the Metaverse. You might use a computer but with all the advancements we’ve been seeing around Virtual and Augmented reality, you’ll soon be able to use a headset to enter a virtual world connecting all sorts of digital environments.

And if in the last years the Metaverse was mostly targeted for gamers, or specific enthusiasts of virtual worlds, with the advancements we’re seeing in VR technology, it will soon face a more mainstream adoption. In the same way that every household now has a TV, a Computer, and even a gaming console, in the future we will all have at least one VR headset in our home.

Who are the major players in the Metaverse?

With all that was mentioned above, the reality is that the Metaverse is becoming more and more attractive. Maybe it’s just a buzzword to encompass many different things in digital space, but the truth is that the idea is catching a lot of interest from investors and companies who are keen to be part of the next big thing. And there are more and more players getting onboard.

Facebook’s Workrooms imagines VR meetings in which people can still use their real-world computers at the same time.

Microsoft acquired Minecraft a few years ago to venture into the realm of the virtual, and in a similar fashion to Facebook, Microsoft has an internal initiative they call the Enterprise Metaverse, where they are building virtual and digital worlds to be used in specific corporate environments.

The graphics card giant, Nvidia, is also playing a big part in the metaverse with their NVIDIA Omniverse platform, which, simply put, is a platform for connecting 3D worlds into a shared virtual universe.

Creators, designers, and engineers can connect major design tools, assets, and projects to collaborate and iterate in a shared virtual space. Developers and software providers can also easily build powerful tools on the modular platform to expand its functionality.

Nvidia’s focus is also the enterprise and is probably the company that is covering a broader set of industries including Energy, Construction, and Manufacturing.

Epic Games’ Fortnite is also one of the biggest players on the field. It started as a massively multiplayer online game, but now it’s one of the teams that are making the most creative uses of their own virtual world. In recent years Fortnite expanded its product, hosting concerts, brand events, and doing more and more inside its own digital world. Musicians can, for example, do virtual concerts within these platforms.

The biggest showcase of this capacity was seen in September where millions of people watched the singer Ariana Grande virtually perform in Fortnite.

Decentraland is a blockchain-focused virtual world built in Ethereum. The world is owned and actively managed by its users and governed through a DAO (see our article on decentralized autonomous organizations).

In Decentraland, you purchase parcels of land on which to build your own environments, marketplaces, and applications. But due to the fact that Decentraland is built on top of the blockchain, and has a token-based economy, unlike the assets you acquire and trade in Fortnite, or other virtual worlds, Decentraland is designed to be decentralized by default. This means that you can transfer your assets to the real world, and trade them and use them in other environments or marketplaces.

But there are more players beyond the big tech guys.

The world’s biggest fashion companies are also entering the space. Users on these digital worlds incorporate avatars which then have their own personalities. And in the end, even if through a pseudonymous character, it’s part of human nature to be unique in some way. Also, there is a big feeling and need for community and tribes.

The biggest brands in the world, like Nike or Adidas, are starting to take notice and many are already experiencing things like virtual clothing or accessories, which people’s avatars can wear in metaverse environments.

So, what is the role of the Blockchain in the Metaverse?

As we’ve mentioned before, most of the approaches to digital worlds are built in a closed manner and in a very centralized way. The assets, items, and worlds don’t connect or transact with each other, or other networks.

We’ve spoken previously about how NFTs and blockchain allow for true Digital Ownership in our #2 article of the Academy Series, and this is where Blockchain can play a very important role: at some point, we’ll need to choose between having an open & decentralized Metaverse, owned by everyone and by their communities, vs a set of closed & centralized digital worlds that don’t allow any interoperability with each other.

Games like World of Warcraft or Fortnite made several billions of dollars only last year just from in-game items. Apple customers spent $1.8 billion on digital items and services between Christmas and New Year’s leading into 2021.

Unfortunately, as we discussed before in our article about Digital Ownership, the assets and the in-game items you buy are hosted by the company and you don’t really “own” them outside their universe. You can’t exchange them, you can’t collect them in your own wallet, and you can’t transpose them to other worlds, online galleries, and so on.

NFTs & Tokens are the way to transact across multiple worlds in the “Open Metaverse”. And this is why digital worlds like Decentraland, Sandbox, or Play-2-Earn games like Axie Infinity or Star Atlas are the building blocks of a more open Metaverse. One that can be interoperable and interconnected.

Blockchain-based worlds in the metaverse will allow for more fairly distributed value among the communities and individuals that are part of this universe and the creation of more organic and decentralized economies.

The Future of Metaverse

It’s hard to know exactly what the future will look like. One thing we can be certain: all around the world we’re seeing more and more people participating in these digital worlds, and teams and projects building tools, hardware, and experiences for the Metaverse.

The future of the Metaverse will not be created with a big bang like it was with the Universe, but it’s unfolding as we speak through a new array of ideas and unlimited creativity provided by people around the world.

Most likely we’ll see a metaverse where we will go (some people more often than others) to engage and interact in a parallel world. Wanderers will simply go for shared and new experiences. Music enthusiasts will watch concerts “live”. Consumers will go for shopping and entertainment, enterprises will have virtual offices and engage in virtual reality meetings for enhanced collaboration, and Academies & Universities will bring training to the next level with fully simulated environments.

The metaverse, which could be seen as a futuristic dream, when Neal Stephenson first talked about it, is quickly becoming a reality.

The biggest question is: how open or closed, centralized or decentralized, will this new reality be?