Our experience with the Internet today is much different than it was 20 years ago. You probably reached this article by following a shared post, an email newsletter, or an automated suggestion made by an algorithm based on your interests. If after reading this article you clap on Medium, share it on social media, or leave a comment to us you are then participating in the social web that exists today. This interaction paradigm is what we commonly refer to as Web 2.0.

30 years ago, when we started to see the first versions of the Web (1.0), the technology was mostly promoted by visionaries of that time and denied by pessimistic views that said that the Internet was just a fad.

This first version was far from being what it is today, but now social technology and platforms have become part of our day-to-day lives. And, if the web we experience today is much different than what it was just 30 years ago, we’re starting to see a gradual shift and the rise of a new type of web interaction. A new version — Web 3.0 — powered by blockchain and decentralization.

And like 30 years ago, Web 3.0 is now mostly promoted by visionaries of our time and denied by pessimistic views that say that Crypto and Blockchain are just a fad. Time will tell, but hopefully, 30 years from now, Web 3.0 will be the norm and it will have improved our lives for the better. 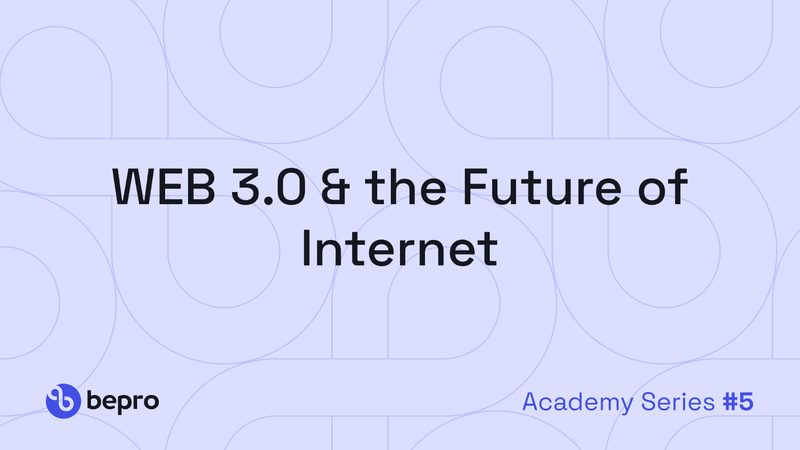 The Evolution of the Web

If we look at the history of the Internet, we can see that these changes matter a lot. Think about how life was before the Internet, and now think how it has impacted and profoundly changed the world. Society has changed as a result of the constant evolutions of the Internet, and as we’re going through another paradigm shift as we speak, we can make part of the early settlers of this movement.

Web 1.0 was the first iteration of the web, and it lasted from approximately 1989 to 2005. It is considered a “read-only” web, and users were mostly consumers of content.

Creators were developers who built websites that contained information served up mainly in text or image format. Most websites had static content, and the only interaction visitors had was to read and obtain information. Websites didn’t have much interactivity at all. You visited a website, executed some kind of action, or consumed some content, and that was basically it.

Don’t get me wrong. It was amazing by the standards of the time. The early web could be seen as a huge portal and it was something like the first open and worldwide library of information.

But there were no cafes, coffee-shops, community forums, and gathering places. Interactivity was almost non-existent, and there weren’t any major network effects that could be generated from the information that was consumed.

This brings us to the following phase:

Web 2.0 — Going social, and then centralized

With the appearance of social networks, we started to see the rise of a new type of web, which is the one we still experience today (although nowadays in a much more complete and ubiquitous manner). This gave rise to what we commonly refer to as the second version of the Web. You can think of it as the interactive and social web.

The biggest change from the first paradigm is the fact that, in the Web 2.0 world, you don’t have to be a developer to participate in the creation process. Tools and platforms quickly started to appear to allow anyone to create their own content via blogs, websites, videos, social media pages, shares, likes, gifs, memes, and so on. Nowadays, if you want to craft a thought and share it with the world ( like I’m doing here ;-) ), you can. Web 2.0 opened up the door for more and more people around the world to become creators.

It’s an incredible feat what we have achieved today, and certainly one of the biggest leaps that society and mankind has achieved!

However, Web 2.0 it’s not all sunshine and roses. All this progress we achieved was done at a cost: putting privacy, personal data, and digital rights in the hands of the companies and entities that develop, manage and run all the platforms we use today for content creation and sharing. As a consequence, we now live in a world where the internet is getting more and more centralized and dominated by a few large companies: Apple, Google, Facebook, Amazon, Netflix, etc. These companies are highly focused on creating closed and centralized ecosystems, controlling the revenue flow, and taking advantage of free user data to create additional revenue by providing products and services using private information.

But although these platforms reap huge benefits from thousands or even millions of people, and grow based on the network effects generated by their users, there’s a big imbalance of benefits that are not shared and don’t flow back to the community.

We spoke previously about true Digital Ownership, and the reality is that within the current paradigm of Web 2.0, we lack a proper infrastructure to provide real ownership for users. Web 3.0 aims to solve many of these shortcomings by fundamentally rethinking how we interact with applications from the ground up, in order to allow for greater privacy, digital ownership and also allowing for the benefits and growth of a certain platform to flow back into the community(not only to a small handful of investors and owners).

Web 3.0 — Bringing power back to people

Web 3.0 is then the next evolution of the Internet, and it is currently in the making. In reality, there isn’t yet a single and established definition of what Web 3.0 is or will be. But the development and growth of blockchain as a technology is allowing us to see how a new, different type of Internet can rise for the masses.

Web 3.0 refers more and more to a truly open and decentralized Internet made possible by the emergence of networks such as Bitcoin, Ethereum, Polkadot, and others. The key innovation of these networks is the creation of protocols and applications that no single entity controls, yet everyone can still trust. This opens up a lot of possibilities to bring power back to the users, and brings us back again to the core values of the Internet: an Internet for everyone, owned by everyone.

In the end, Web 3.0 is about creating a more user-centric web where we retain complete ownership of our data, identity, and digital assets.

A few key characteristics of Web 3.0 applications comprise of the following:

As mentioned previously Web 3.0 is still currently in the making. There’s a vision of where the Internet should move to, like 30 years ago, we’re still far from seeing mass adoption by users. Probably, the biggest drawbacks at the moment for Web 3.0 mass adoption are the following:

Either way, we’ve come a long way on these 3 factors, and nowadays there are thousands of teams, developers, and projects working every day to improve the speed, cost, and UX of all the infrastructure that’s needed to be built for Web 3.0.

The future is Incredible

As we said, we are still early, and there are several challenges to overcome until we reach mass adoption. But we’re progressing fast, technology is maturing, and innovation in the field happens every single day.

And at the same time, Web 3.0 is already here, it’s not available to the masses but it is growing at a steady pace. We already see it creating disruption in several sectors, including:

Whatever the path forward, Web 3.0 is a great contender to bring to an end to the current dominance of “top-down” business models. By elevating customers into participants, and establishing more transparent networks, we will provide real rewards and agency for communities that deserve it.

The future is incredible. Let’s go!

Of course you can! At BEPRO Network we build tools for builders and help ambitious individuals and teams speed up their idea development. We recently released our NFT Factory into our codebase which allows you to easily build NFT-based applications. Start here: http://docs.bepro.network