Our first article was an introductory primer to NFTs. We explained what they are and briefly covered some use cases. Today we’ll cover one of the reasons why NFTs are a game-changer in our society: the rise of Digital Ownership. 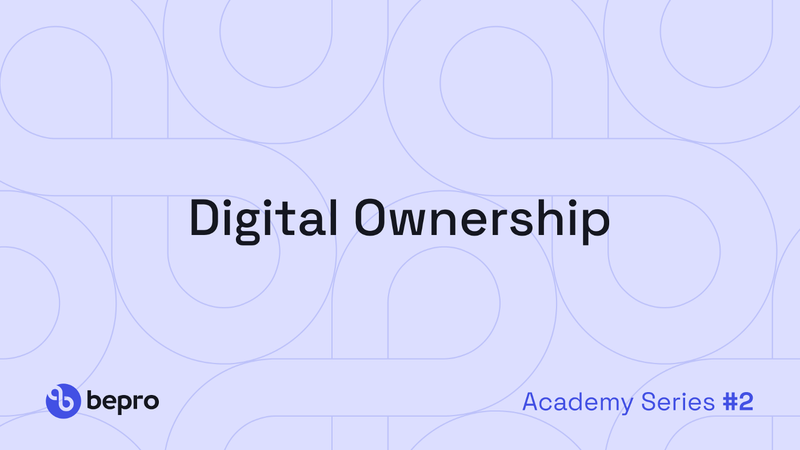 Ownership in a digital world

In the “real” and physical world ownership is something that is rather easy to determine. Legal aspects aside, you can always somehow trace any physical item to the actual owner, whether that is someone who created that item or someone who bought it at some point in time. It is a natural act of our society to understand and acknowledge who owns what. We do it every day, even unconsciously, and we learn from an early age about ownership as an important concept.

Now, the case becomes somewhat more complicated when we enter the digital realm.

Why is that, and why does it matter?

Well, over the past years we’ve seen a huge shift into digital: pretty much everyone has an online presence and we’re developing our own life and identity online, leaving digital breadcrumbs everywhere.

And although that might be a transitional step for older generations, where more than half of their life is “analog”, we now have an entire generation of people who are called digital natives who have interacted with new technologies since they were born. As time passes by, future generations will be even more and more familiarised with digital technologies (and won’t even remember a time prior to them).

This only means that society and civilization are going digital, whether we like it or not.

We’re seeing the rise of massive online experiences through social media, virtual worlds, multiplayer games, and digital art. The appearance of a parallel society with anonymized and pseudonymized movements of liberty and decentralization living in a place of its own called the Metaverse. And with this, we’re now seeing assets and items that are 100% digital: assets that don’t have any kind of “physical” representation but exist in the digital ether.

Items created in virtual worlds or games, posts shared by celebrities, or creations published by artists are becoming the norm and becoming desirable and more valuable. And with this, we see the emergence of a proper (and huge) economy around digital goods where people are buying and selling them. This means that those assets should have a way to properly determine who is their rightful owner, someone who derives benefits from that ownership, benefits such as: external status, store of value or access, or even pure enjoyment.

Now, the big question is: how do we determine ownership in a digital world? Digital files can easily be copied and pasted, replicated, and distributed. How can we prove who actually owns the original?

And this is where NFTs come into play. As we’ve seen in our previous article, Non-Fungible Tokens are a natural evolution of initial fungible tokens that came into prominence with the appearance of Bitcoin, Ethereum and the subsequent explosion of blockchain based tokens.

NFTs, because they are decentralized, and living on public blockchains, provide an immutable source of truth for digital ownership rights that hadn’t previously existed. And until NFTs there wasn’t any legitimate way to prove ownership of digital items in a decentralized manner.

Yes, you can still copy paste, or print the item the NFT represents, but you can also have a copy of a Mona Lisa in your home and its value it’s close to nothing.

In an increasingly digital world and ever-expanding Metaverse, for everyone who cares (and a lot of people do…) the owner of the “original” content matters independently of how many similar or identical copies are out there.

This opens endless possibilities for everyone in the Metaverse. If you are a creator you now have a way to certify which Item is the original, no matter how many copy/pastes and replications were done. If you are an owner, an art trader, or someone who just has your “life” in the digital, you now have a way to proudly show around what items you own.

We are just starting to learn about the impacts of it, but the new reality is that the digital world is blending with the real world. All future generations will be digital and pretty much everyone will own digital assets of some form: coins, art, game items, tickets, pictures, TikTok posts or tweets.

And everyone can still copy and paste the JPEG or the MOV file, but it will be their wallets with their NFTs that will be the final proof of ownership.

We obviously can’t cover everything in a single article so in the upcoming series, we will explore a bit further the implications of NFTs in the digital economy, the upcoming growth and potential of ownership in the digital age, and detail several more possibilities and use cases for NFTs.

Of course you can! At BEPRO Network we build tools for builders and help ambitious individuals and teams speed up their idea development. We recently released our NFT Factory into our codebase which allows you to easily build NFT-based applications. Start here: http://docs.bepro.network