One of the best ETH events in 2022, ETH Lisbon, took place from the 28th to the 30th of October. This Ethereum-focused hackathon had over 330 participants and 97 projects delivered using TAIKAI’s hackathon platform.

This large number of developers did not happen by chance. In addition to the ability to create innovative projects, the total prize was $20,000, with the best 10 projects earning 2,000$ each.

In order to compete for these prizes, participants teamed up using TAIKAI’s matchmaking system, resulting in 97 projects delivered that were evaluated by 13 juries.

We’ve analyzed the projects and compiled a list of the best ones, divided by categories. The best DAO and DeFi projects from ETH Lisbon

Before we get into the details of this project, which was named one of the top ten hackathon projects at ETH Lisbon, it's important to understand that it uses the Euler Protocol, an Ethereum-based non-custodial DeFi (Decentralized Finance) protocol that allows users to lend and borrow almost any crypto asset.

This is important to understand because the Lekker Finance project's goal is to allow users to enter leveraged positions via Euler.

The hackathon system works as follows: positions can be opened in a single transaction using flash swaps, making the process easier for the end user. It's no coincidence that the project’s slogan is Leverage Made Simple.

Also, this makes loans and investments more difficult to trace and exit. 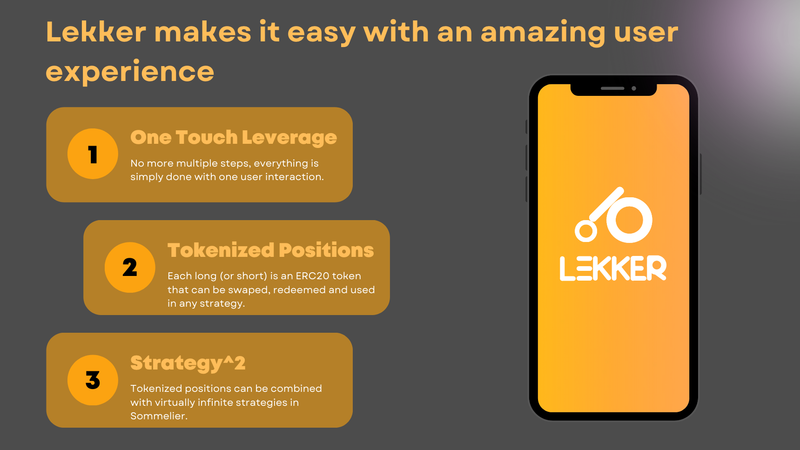 With Lekker Finance, interest rates are reduced by simplifying the process on a single transaction, as opposed to what happens in centralized exchanges, for example.

Elected as one of the Top 10 hackathon projects of ETH Lisbon, GlacierDAO has proposed a Decentralized Autonomous Organization that preserves open-source code as a public good.

The project's authors argue that code, like data, should be preserved in a censorship-resistant manner.

The concept arose after some developers complained that their GitHub accounts had been suspended for writing tornado cash codes.

To clarify, tornado cash works as a token mixer, used to shuffle transactions in a way that makes tracking difficult in public blockchains like Ethereum.

To ensure the preservation of open source, GlacierDAO conducts a call for funds every quarter. Individuals donate funds to cover the costs of preserving codes in exchange for NFTs. 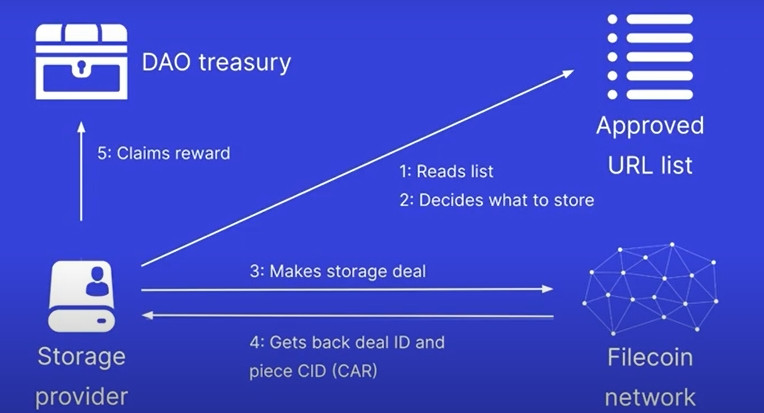 On the other hand, a call for URLs is issued at the same time, which means that individuals can submit URLs to code repositories that they believe are valuable.

URLs are placed on a list for those who contributed funds to vote on whether the code should be preserved.

The funds raised will then be used to ensure the code's preservation on the FileCoin Network, an open-source peer-to-peer network that stores files, protocols, and incentive layers. In other words, users pay storage providers to store their files and this payment is made through investors in the GlacierDAO strategy.

👉 More details about the project

Bibliotheca DAO is a web3 game development studio that creates on-chain games for StarkNet, a permissionless decentralized Validity-Rollup (also known as a "ZK-Rollup").

A team from Bibliotheca DAO developed a solution on ETH Lisbon to hide one player's information and expose it only when other players meet on-chain conditions.

They accomplished this through the use of a trusted 'dungeon master' (third party) who stores private information to enable multiplayer on-chain games, achieving an on-chain without the ZK hashing construction. 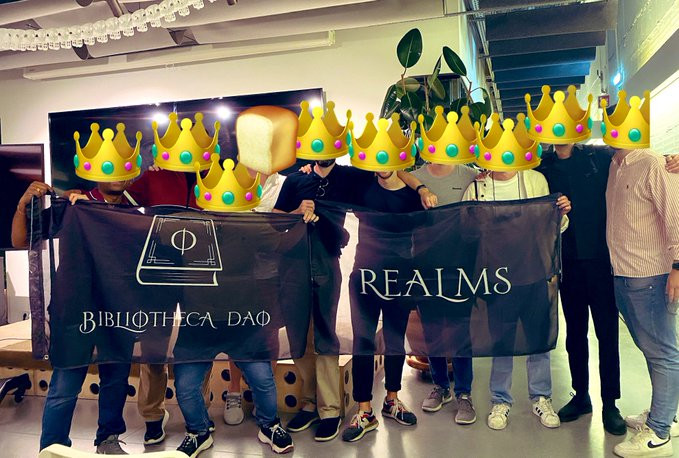 To get it done, they used the game Realms Assassins – Fog of War as an example. The project was also one of the 10 hackathon winners presented on ETH Lisbon.

👉 Read more about the project

This project was also named one of the hackathon's top ten projects and won first place in the Wallet Connect best public good bounty.

The idea was to create an automatic website archiving system based on web3 protocols that could be paid for with a variety of crypto assets, acting as a decentralized backup of the world wide web.

The "Archive the Web" system enables users to automate website archiving on the Arweave decentralized protocol at predetermined intervals (for example, every 60 minutes) for an approximate duration (for example, 365 days) and pay for data storage with ETH, ERC-20, or AR.

It means that users can permanently and automatically save information, apps, and other content (such as images or web apps), preventing data published on the internet from being lost, as happens in many cases every day. 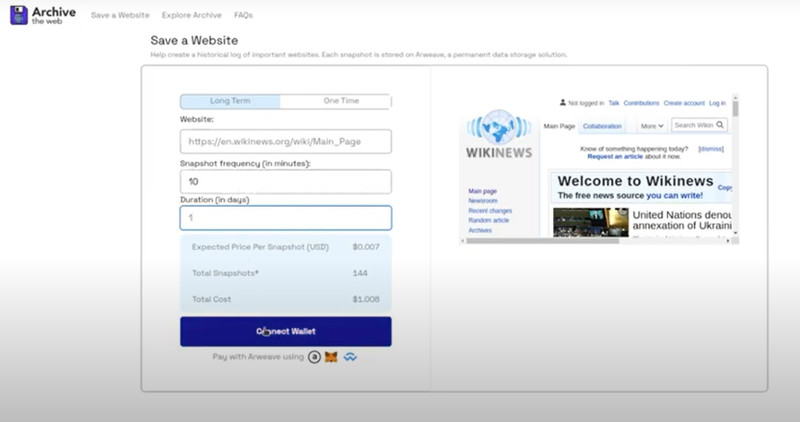 To achieve this, the Archive the Web team created a custom Metamask and a WalletConnect button that allows direct interaction with Arweave and uses the arp Ethereum signer to interact with Smartweave contracts via ETH/ERC20 wallets.

👉 Check out more about Archive the Web

But don’t take our word for it. You can see how the developers built this project in the video below:

👉 Read more about the project

Testamint, one of the zkSync bounty winners, is a social recovery mobile dApp project that uses zkSync account abstraction to allow account recovery by a group of trusted people after a predetermined interval of inactivity.

Furthermore, the solution provides the user with the "still here" button to complete a transaction and prove the user is still alive. Watch the DEMO:

👉 Check out more about Testamint

During ETH Lisbon, this project, which promised to be a Google Translator for Smart Contracts, was rewarded in the Wallet Connect - Best Mobile UX bounty category.

The mechanism is quite straightforward. Users only need to paste a smart contract URL to get a full translation that anyone with web2 code/math knowledge can understand.

Then, it is possible to save these translations or use Wallet Connect to upload them on Filecoins IPFS.

This tool can also be used by auditing firms to review smart contracts. It saves time and allows less experienced team members to get an audit started.

You can test it right now by entering the URL of your smart contract on the Smart What website. 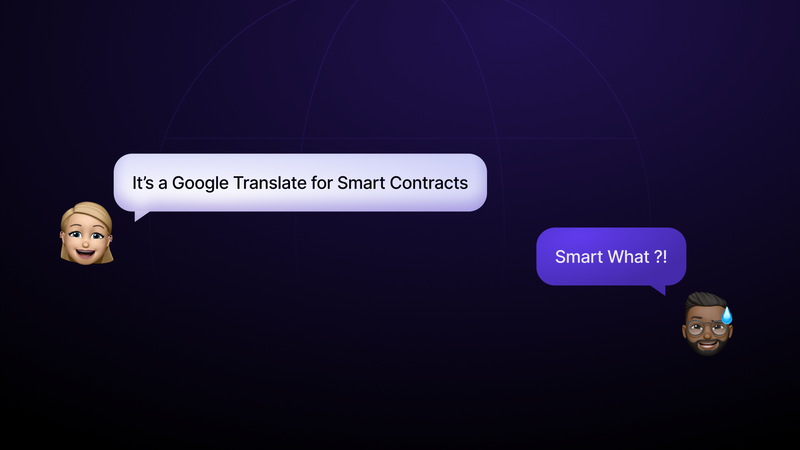 👉 Learn more about Smart What?!

This fantastic tool was one of the top ten winners of the ETH Lisbon hackathon. The team's concept was to design a solution that could provide users with information about the outcome of transactions and the addresses they are interacting with, before sending transactions.

In other words, users can analyze smart contract data and transactions before signing them.

SafeCheck can be added as an extension to MetaMask accounts or used directly on the web app by entering a smart contract number and letting SafeCheck inspect it. Additionally, transaction calls can be simulated directly from the web app.

Here's a sample of the SafeCheck web app interface:

And here is how it works when connected with MetaMask: 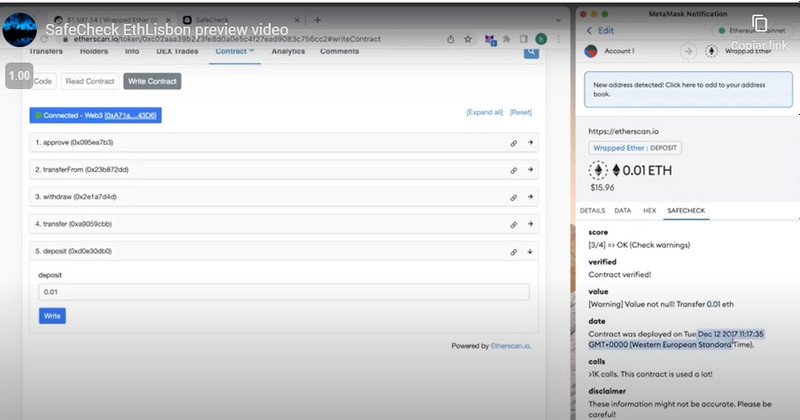 👉 In-depth look at the project

This intriguing project was chosen as one of the top ten projects from the ETH Lisbon hackathon. The idea is to show color flags that indicate how safe it is to interact with specific smart contracts: green (safe to use), orange (warning), and red (dangerous).

It acts as a MetaMask Snap extension that reads and categorizes smart contracts based on a security suspicion standard determined by Trust Score.

The project's authors intended to provide users with non-technical information using a simple way to determine whether a smart contract is safe to interact with.

The system automatically analyzes quantitative and qualitative data about a smart contract, such as its popularity (how many people have interacted with it), time of existence (contract age/antiquity), frequency (recent number of interactions), repetition (how many times each user has interacted with the contract), and so on. 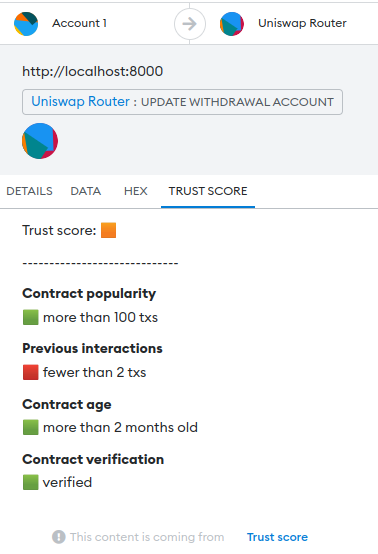 Overall, the ETH Lisbon hackathon had some pretty amazing projects!

Curating this list was a tough task too. In total, 97 incredible projects were delivered but it would be too much information to include them all here.

However, to provide a better overview of the event, we compiled a list of "honorable mentions", which is comprised of a handful of projects that caught our attention. 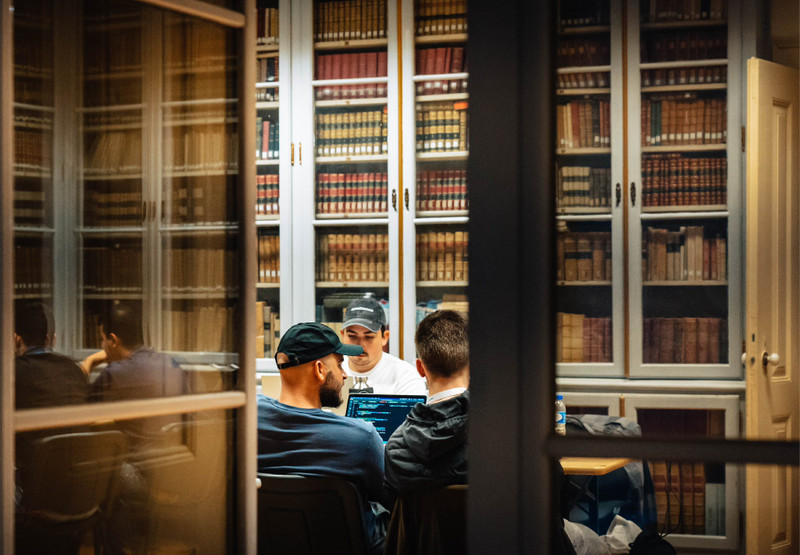 This creative idea was rewarded as one of ETH Lisbon's best projects. The Zully project proposes an embeddable widget for developing Web3 membership programs that increase brand engagement and loyalty.

The project's concept is based on users receiving a membership card and accumulating loyalty points by completing on-chain and off-chain quests.

In exchange, they receive a customizable NFT membership, granting users social status and increasing their sense of belonging to a brand community.

There is a utility shop on the widget where users can spend points to get perks and exclusive benefits.

The Multi Resolver Snap project provides a solution for creating a friendlier web3 environment for both users and developers.

The author's idea was to create a snap on MataMask that allows users to send cryptocurrency in a more straightforward manner. It is possible to send crypto to anything using Multi Resolver, such as Twitter names, emails, phone numbers. In other words, this snap enables users to convert any object to an address and send value transactions.

According to the author of the project: “This multi-resolver MetaMask Snap enables dApps to send transactions to string-type handles that can take on a multitude of origins.

Instead of integrating multiple domain services and resolvers individually, dApps can now simply call this snap and let MetaMask do the rest”.

This multi-signature wallet is then used to power a pluggable authentication infrastructure, much like Web3Auth works. 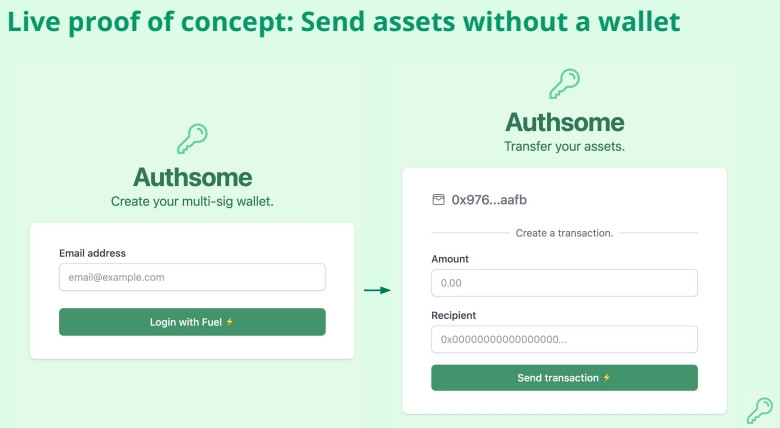 Here’s how it works:

The user logs in to Athsome using their Fuel email and password. Then, Authsome generates three keys automatically: one is password-encrypted and sent to the backend service; another is stored in the browser's local storage; the third is saved in a file for manual recovery. Following that, the user can make payments.

For the ones who do not know Fuel, it is a fast execution layer for modular blockchains, and FuelVM is one of the central technology pillars, designed to reduce wasteful processing in traditional blockchain virtual machine architectures. 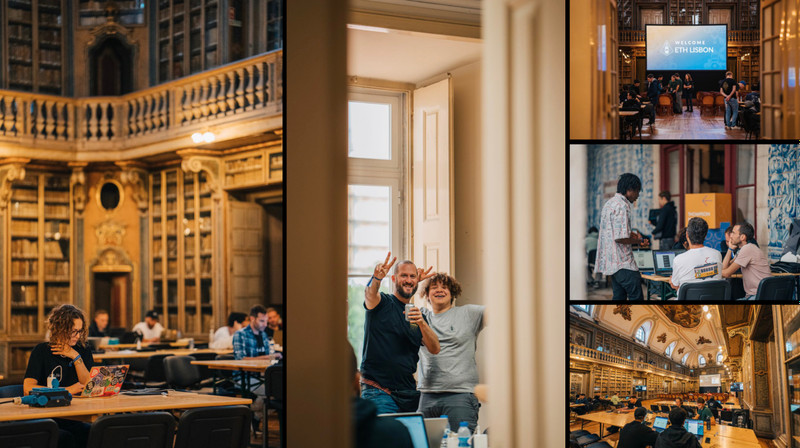 ETH Lisbon hackathon was incredibly fun, exciting and competitive. These challenges provide a space for developers, innovators and enthusiasts to brainstorm ideas and develop projects that help the web3 space grow.

This hackathon was also an excellent validation that hackathons are here to stay. We learned a lot from these projects and shared a glimpse of the obstacles, iterations and opportunities available right now.

Now it's up to you! Browse our hackathons page and start building today.

TAIKAI's hackathon platform is the perfect place to host your web3 hackathon. No matter if the hackathon is online or hybrid, we can help you drive innovation and engagement.

Here's a glimpse of what our platform offers:

Request a demo today and take your hackathon to the next level.

ETH Lisbon is a hackathon driven by the Ethereum Community and hosted by Ethereum Foundation.

Based in Europe's crypto capital, ETH Lisbon aspires to bring together some of the world's best Ethereum builders to make innovative projects. 🚀

ETHLisbon 2022 was hosted from 28th to 30th October at the Academia de Ciências de Lisboa, Largo de Jesus, and both beginners and experienced professionals from the Web3 world were welcome to join.

This event in particular was also structured for attendees who have background knowledge of Web2 technologies but want to build on Web3 for the first time.

A post-hackathon strategy must include an NPS survey as well as data collection, such as social media mentions and news clippings.

How to organize an Internal Hackathon

To organize an internal hackathon, you must first align goals, define rules, seek mentors, and select a reliable platform.

Smart contracts are a key feature of blockchain and web3 technology that underlies cryptocurrencies like Bitcoin and Ethereum. But what are they, exactly?
See all