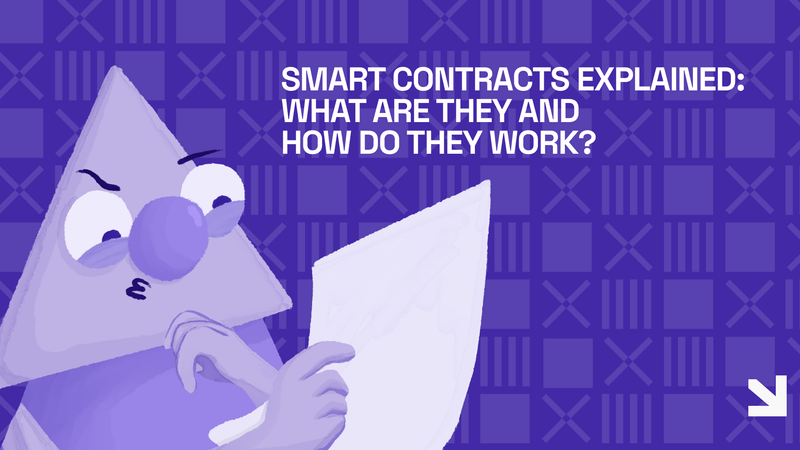 Simply put, smart contracts are tiny programs that run on a blockchain and automatically execute when certain conditions are met. They can be used to facilitate transactions between two or more parties without the need for a third party to mediate the transaction.

How do smart contracts work? ⚙️

Smart contracts are a critical component of the decentralized web 3.0 ecosystem, as they provide a way for two or more parties to facilitate transactions without needing a mediator or other third party to oversee and verify the transaction.

At their core, smart contracts are simple programs that run on a blockchain network. These programs contain statements that define specific conditions, or "if/then" statements, for example.

When certain conditions are met, the program will automatically execute the associated task or function.

This unique property of smart contracts makes them ideal for a wide range of applications and use cases, from home sales to financial transactions to supply chain management.

Because they run on a blockchain network, these contracts are also immutable, meaning they cannot be tampered with or altered once they have been created. In this way, smart contracts provide a secure and highly reliable means of automating transactions between multiple parties.

As the popularity of blockchain technology grows, so too does the potential for smart contracts to revolutionize many areas of our economy and society.

Furthermore, smart contracts are distributed via blockchain. It means that every node in a blockchain network validates the contract output. As a result, no one can force the contract to release funds because the nodes will detect such an attempt and mark it as invalid.

Do all smart contracts run on Ethereum?

Although Ethereum is the most popular platform for creating smart contracts, there are others that provide the same security and efficiency, including Solana, Cardano, Cosmos, Hyperledger and BNB chain.

Regardless, keep in mind that Ethereum smart contracts are public and can be viewed as open APIs.

This means that users can use other smart contracts, broadening their options for creating new ones.

A tip if you want to write your own smart contract

With dappKit, you can start building your own smart contracts. It is a free and open-source web3 SDK that enables developers to create web3 applications and products.

What's most fascinating about dappkit is that developers don't need to start coding from scratch. This simplifies development down to only three lines of code. Also, the dappKit transpiler allows developers to generate a typescript/javascript SDK for custom smart contracts.

Smart contracts can be used for a variety of purposes other than sales. They are used in supply chains, object registration, and fund release, among other things, as we will see later in this article.

👉 CeFi vs DeFi: what you need to know

Smart contracts can be used for more than transactions- they have different applications in various industries.

For example, banks could use smart contracts for loans and automatic payments. Also, insurance DAOs are already taking advantage of smart contracts to handle certain claims. The community of the DAO would need to approve the insurance claim before it is given out, similar to how a board or commission approves a request.

Furthermore, smart contracts can also be used in crowdfunding, for example, when people bring money to a project and, if the project manager fails to meet the goal, the money is automatically returned.

Let's look at some smart contract examples and some case studies to see how they work in practice.

There are four entities in a supply chain management flow: a manufacturer, a supplier, a retailer, and customers.

Smart contracts may improve efficiency, speed and reduce disruptions to this process.

Farmers, for example, could enter their food details on smart contracts, such as origination, crop type, and storage information, using blockchain, so that the information stored is accessible to all involved stakeholders.

Following that, food processing companies can bid on crops using the smart contract, and once a bid is accepted, they enter refining information on the blockchain.

The following step is for processing companies to transport the food to wholesalers, update transportation details on the blockchain, and wholesalers to begin bidding via the smart contract.

Finally, the end consumer tracing the food items from the supply chain blockchain can ensure that every piece of information captured on the smart contract is accurate.

In other words, since the rules are incorporated into the smart contracts, food compliance is maintained at all stages of processing. This assists consumers in determining quality and origin.

For example, IBM Blockchain has created we.trade with the goal of creating a trustworthy ecosystem for trade with standardized rules and simplified trading options. The goal is to reduce trading friction and risk while also streamlining information exchange and increasing trading opportunities for all participants, such as businesses and banks.

In general, insurance companies suffer from poor communication among parties, which presents an opportunity to build smart contracts in this industry instead of cumbersome paper contracts. Furthermore, smart contracts significantly reduce the likelihood of cheating and making false claims to receive payouts.

With no third party involved, there is no room for manipulation on either side thanks to algorithms in smart insurance code that can eliminate administrative hurdles, predetermine payout scenarios, and execute contract conditions.

In a recent smart contracts example, Intellias developed a web app to enable online vehicle insurance policy purchases for insurance providers in Europe, as part of a smart contract solution.

Smart contracts are a highly secure method of making contracts between all parties involved. However, users should be aware of some smart contract risks and drawbacks, such as immutability, confidentiality, external data, and legal issues.

Immutability is one of the main challenges. The protocol rules cannot be changed once they are established on the blockchain.

While this increases security against fraud, it also makes smart contracts more difficult to use. Furthermore, the immutability of the code makes it nearly impossible to fix bugs.

External data issues are another disadvantage of smart contracts because blockchains rarely communicate outside the network.

To solve it, developers must use oracles, which are applications that retrieve data from the outside world.

Confidentiality is one of smart contract risks, because blockchain makes all node activity information related to transactions available.

So, if you don’t want confidential information about your contract to be available, maybe you should think twice: blockchain applications can be tampered with by malevolent users to reveal the state of the contract.

Legal issues are another concern since lawyers are not required while using smart contracts.

Besides that, if you later take some discussion to court, it is unlikely that it will be used as evidence because most countries do not consider smart contracts to be legal under their laws.

Smart contracts are unique in that they can be executed automatically on a blockchain when predetermined conditions are met, without the need for third parties. There are already some good examples of smart contracts being used across industries such as supply chain, trade and insurance models.

Sweden has already utilized smart contracts to establish land ownership via a blockchain-based land register, which could pave the way for other government smart contract use cases. create new possibilities for how real estate is bought, sold, and managed – from streamlining paperwork to creating trusted Land Records repositories.

Another example is the winner of HACKATHOME, a real estate hackathon held in Lisbon and hosted by TAIKAI, who developed a project that uses smart contracts to connect property owners, investors, and curators (such as architects).

Despite the challenges smart contracts face, there is no doubt that the future looks bright. As more businesses and industries begin to adopt blockchain technology, the demand for smart contracts is likely to grow.

As such, developers and programmers will need to continue working to improve and refine the technology in order to ensure that it remains secure and reliable.

Ultimately, this will be essential for the widespread adoption of smart contracts by businesses and consumers alike.

ETH Lisbon 2022 was held from the 28th to the 30th of October, with nearly $140,000 in prizes. The best projects focused on DAO, DeFi, Smart Contracts and Wallets.
Ver todos