Fast forward a few years–and inspired by the basic concept of Bitcoin and its underlying blockchain technology–we started seeing the appearance of more sophisticated approaches that allowed the creation of execution layers, where programmable interactions are managed and controlled by the blockchain. These are commonly referred to as Smart Contracts.

In 2013, Vitalik Buterin conceived Ethereum and released its whitepaper, which was the first major blockchain to feature Smart Contracts at its core. Later in 2014, Buterin and a larger team of developers started development on Ethereum before launching the blockchain live in 2015. This opened the door for a huge community of developers and blockchain enthusiasts to start building their own decentralized applications, open to everyone. Since then, other alternatives appeared but Ethereum is still by far the most used smart contract blockchain and the one with the most active and engaged community.

As the technology matured it then became very clear that the financial world could be way more disrupted beyond a single coin! With the power of Smart Contracts, engineers, developers, and economy enthusiasts from all over the world came together and started to develop an alternative not only to a currency but to the entire financial world. And this is where the Decentralized Finance (DeFi) movement appeared.

DeFi picks up on the basic main concept of Bitcoin of a digital “decentralized” currency and expands on it, creating an entire digital alternative to traditional banking, Wall Street, investment funds, and so on. This alternative has the goal of creating a fairer financial world accessible to anyone with an Internet connection. There are billions of people in the world that don’t have access to banks or are tired of the lack of transparency on how the traditional banking system deals with their money. DeFi aims to solve this. 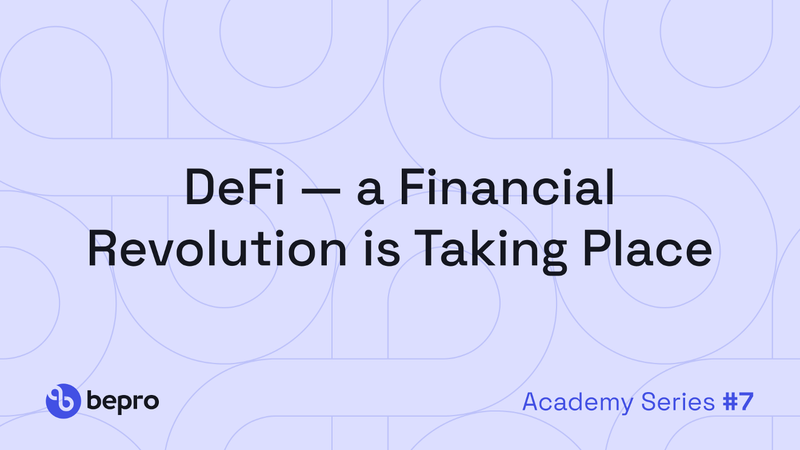 In this article, we intend to cover some basics about DeFi, so you can get a better grasp and understanding, and hopefully start your own journey of “unbanking yourself”.

2) Some commonly used applications for DeFi

4) How to get started

There are several differences that traditional banking and DeFi have, and below I highlight the 4 key characteristics I believe are the most important.

Independence — Contrary to banks and institutions, which have a battalion of employees to manage and run operations with their customers’ money, DeFi operations are not managed by humans. Instead, the rules are pieces of software (or smart contracts, as mentioned above), and once the smart contracts are deployed on the blockchain, the DeFi applications and protocols basically run themselves without human intervention. In practice, there are always teams of developers working hard to maintain and improve the protocols with upgrades, but the management of the money, funds, and investments is 100% done by algorithms. Humans can fine-tune the process, but they can’t override it once it’s running.

This is very powerful because it eliminates both human errors and human malice from the equation. The way money is managed and transacted becomes more efficient and transparent this way.

Non-Custodial & Private — Another important aspect of DeFi is that all major protocols are non-custodial. This means that people and individuals keep full control over their own assets and data, and are responsible for managing their own assets. It also allows for value to be transferred from one person to another, without the need to use intermediaries like banks and other financial institutions. This is because users are the only ones who hold the keys to their wallets and control their funds. No third parties have custody of your assets — you do.

No more depositing money in a bank, without knowing what they are doing with your money, and how they are using it.

Transparency — A very important aspect of DeFi that is somehow still very underrated is the fact that the protocols are built with code that is transparent on the blockchain and open for anyone to audit. This builds a different kind of trust with users because anyone has the opportunity to understand the contract’s functionality or find bugs. Of course, this is highly technical, and only technical experts can analyze it. But, you can be confidently assured that many more independent experts will analyze the code, in a much more transparent way than any other bank when disclosing their activities.

With Blockchain, you can’t have black-boxes or manipulate results. All transaction activity is also public for anyone to view.

Borderless & Global — Permissionless blockchains are completely borderless. This means that DeFi applications are designed to be global from day one. They are not constructed by location or nationwide networks. Whether you’re in Portugal, El Salvador, or Australia, you have access to the same DeFi services and networks. You can transact money freely around. Of course, local regulations may apply but, technically speaking, DeFi apps are pretty much available to anyone with an Internet connection.

2) Some commonly used applications for DeFi

So, what are some of the most common applications for DeFi at the moment?

Lending & Borrowing — With DeFi you can borrow money using your crypto assets as collateral, as you do with a normal bank. However, another interesting part is that you can also be part of the other side: the lender. You can put your assets and coins to use by lending and earning interest rates on those loans. Smart contracts and protocols then manage all that interaction to keep it trustless. The two parties involved (lender & borrower) don’t need to know each other, and the decentralized algorithms will manage the successful interaction.

Yield Farming — yield farming protocols are protocols that automate the management of crypto assets in order to generate the highest possible returns on those assets. At the simplest level, what it does is simply optimize the return by constantly moving assets around multiple interest-bearing products in order to achieve maximum returns.

Decentralized Exchanges — Decentralized exchanges (DEX) are cryptocurrency exchanges that aren’t owned and managed by a central entity, and that allow for direct peer-to-peer transactions between users. This way, you can trade assets while keeping them under your custody, and also by preserving your privacy.

Stablecoins — Stablecoins are a class of cryptocurrencies that offer price stability and try to maintain a 1:1 ratio with other major fiat currencies like the Dollar or Euro. They are usually backed by reserve assets to back their value. Stablecoins are highly used in DeFi protocols because users don’t need to be concerned with the volatility of other assets against commonly traded currencies in real life.

Tokenization of Real-Life Assets — Asset tokenization is becoming more and more common where tokens that represent ownership of real-life assets (art, real estate, etc) are being issued on the blockchain. By issuing them, you can then build additional financial decentralized products on top of these assets.

Insurance — As several risks arise using DeFi (see the section below) insurance protocols also arise. Currently, you can already find in the market several insurance solutions for your crypto-assets.

We cannot speak about DeFi without also covering that this is still a highly risky activity. While I believe that DeFi is the future of finance, there are also some serious risks associated with it.

A very open and permissionless world is an awesome thing but it allows the participation of several bad actors too. One has to be extremely careful which tools and protocols to use, as there have been several cases of scams and “rug-pulls” happening in the last few months.

Also, since everything in DeFi is Self-custody based, it’s much harder to deal with issues when you make mistakes. For example, you can’t simply reverse a transaction sent to the wrong person.

On top of that, it’s very common for newcomers to be attracted to new financial products or protocols that offer incredibly high returns (even for Crypto parameters), but many of these are usually poorly audited and are highly vulnerable to attacks and hackers. Several hundreds of million dollars have been stolen in the past years because of smart contract vulnerabilities. On the positive side, there are already several projects and protocols that are highly battle-tested, and probably the best place to start when moving some of your portfolios to DeFi.

In the end, there isn’t a regulator or tech support who can send back funds transferred in error, or that were hacked and disappeared, so you have to always be self-conscious of the decisions you’re making.

All of these are normal in a very nascent industry that moves really fast and is less than four years old in reality. Care and precaution are always advised.

Finally, if you want to get started here are some of the most well-known and used protocols on different Blockchains, where you can start on your own journey.

Please keep in mind that this list simply identifies a few of the most used applications in the DeFi space, and it’s not at any point an endorsement of them. Always do your own research!

There are many more, but this is a good start. Independently of the blockchain of your preference there are several DeFi options available.

Hope you find the article interesting and enlightening. Good luck on your journey of unbanking yourself! :)