Academy Series #3: Web3 and the democratization of Play2Earn revenue models

Generating income by playing games? This has always been the dream for any video game enthusiast, and recently we’ve been witnessing several ways players can monetize their participation in the games they play.

However, the money and revenue generated around gaming economies are still highly centralized around the game publisher, the platform owner, and some high-end Esports professionals. Considering how huge the communities around some games are, we actually see a great imbalance of money flows, where income and revenue are poorly and unevenly distributed among all the players and users that interact with and generate value around the game. 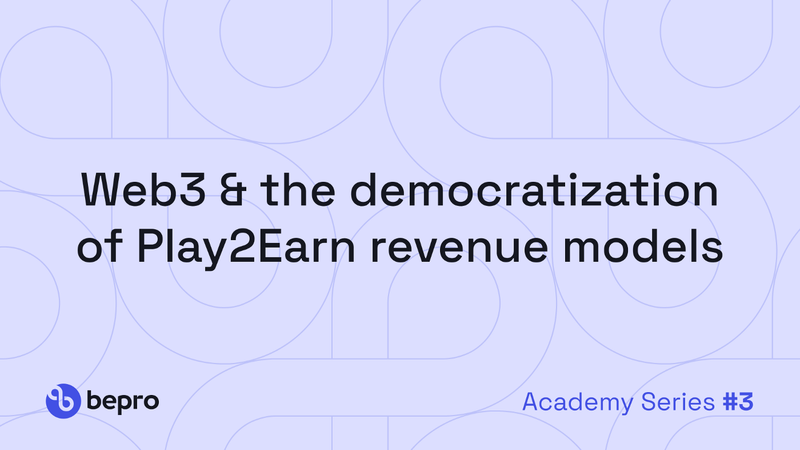 Web3 Gaming might be an alternative to this situation, and we’re starting to see new approaches to gaming that are bringing additional and new creative sources of income for users while creating entire new economies and communities around games.

In this article, we’ll be covering the following topics:

Nowadays most players’ revenue comes from Esports competitions. Esports activity has been around for more than 20 years, with a steady rise YoY. The audiences for Esports are growing at an incredibly fast pace, and popular games have taken the industry by storm. League of Legends, CS:GO, Fortnite, Call of Duty and DotA are all household names for Esports competitions nowadays.

The Esports phenomenon has transformed video-gaming into a professional activity where some gamers can achieve superstar status and income, similar to successful football or basketball players. Many of these gamers now have multi-million dollar revenues per year, and major global brands like Adidas, RedBull, Levis, Mercedez-Benz, and many others, are investing hundreds of millions of dollars in sponsorship money for teams and Esports competitions.

The revenue model, however, is still very traditional, for an industry that’s fully electronic and digital. Players in Esports still make most of their revenue in a traditional way: winning cash prizes, earning team salaries, obtaining sponsorships, and selling merchandising and media rights.

It’s clear that nowadays Esports takes the lead in generating income from games but in an old-fashioned and uneven manner. The truth is that receiving any sort of revenue for gaming is not for everyone. The majority of revenue earners are highly skilled and dedicated professional players, and only top players get to be in a place where they make money regularly.

A more powerful and interesting way to generate a more recurrent flow of income can be by playing a game where you can simply be part of the economy. Ever since the rise of massively multiplayer virtual worlds, there has been some form of a market for digital items. If you played Runescape, World of Warcraft, Everquest, or others you know these dynamics were part of the game.

Most of the mechanics of these games are made to either create private markets, totally centralized and controlled by the publisher or create “Pay-2-Win” dynamics where users end up spending real money to buy items directly from the publisher in order to proceed faster in the game. In a Hotel California kind of way — you can check in anytime you like, but you can never leave — money enters a centralized ecosystem and never leaves. Most of the time there’s no way to redeem back items for cash money, and the only one that truly cashes out is the controller of that ecosystem.

In some cases, you can find secondary markets to trade and sell your items for real cash. But most of these markets are not endorsed by the publishers, and they are grey to black markets where there isn’t a trustless way to trade. Other potential dangers are purchasing stolen accounts/goods, or you can be subject to unreliable traders and scams. It’s also worth noting that although the players spend hundreds of hours amassing and trading these items, they are never technically even theirs. The items are available to use, of course, but they aren’t actually owned by the player (for more on this check our last article about the concept of digital ownership).

Making money flow back to the users

Any crypto & blockchain user now understands that there’s a better option, and the world of NFTs is a great fit to be that alternative. We’ve said several times that NFTs are much more than just collecting cute penguins & pixelized punks. NFT projects that issue in-game assets in blockchain are creating true Play2Earn (P2E) mechanics to gain traction among users and too much success.

One recent example of this success is Axie Infinity, a fantasy universe where players battle, raise and collect Axies (the monster-like creatures that give the name to the game). The game mechanics reward gameplay and a player-driven economy: Axies themselves are NFTs that can be bought and traded outside the game, and battling monsters in the game will earn you tokens called Smooth Love Potions which can be traded in highly liquid global markets for USD, BTC, or ETH. With those proceeds, you can choose to buy additional items in Axie Infinity, or migrate that value to a different crypto-enabled game, or even bring them to the real economy (if you’re interested, a good explanation of game economics can be found here).

One interesting aspect is that Play2Earn becomes a way to create opportunities globally, and we’ve been seeing huge adoption coming from players in countries like the Philippines, Brazil, or Venezuela, where this income can actually be a lifeboat for emerging economies that were completely destroyed by the pandemic (we recommend this documentary about the phenomenon here).

This is a very interesting dynamic compared to traditional models since the revenue generated within the game is much more evenly distributed among gamers. Some gamers work harder than others and are rewarded in that sense. But even if you play one or two hours per day, you will receive your fair share for the contribution to the game, the economy, and the community around it.

Today there’s a big opportunity for innovative gaming companies to experiment with new business models, and gain traction in that space. There’s nothing wrong with creating gaming mechanics that generate tons of revenue for the publishers, but it’s also reasonable to have some of that value flowing back into the game’s economy where it can work its way back into the hands of the players that helped generate the most value.

At the same time, this could generate higher levels of engagement. Players are directly incentivized to work on their accounts for the long term, grind for rewards, and contribute to the economy. Rewarding users makes them bigger ambassadors of games and might bring bigger rewards in the future such as a much stronger and more faithful community.

The core idea of Play2Earn is allowing value and ownership to be on the player’s side. In non-blockchain games, you can spend years and years building up your inventory of in-game assets, but then when you leave that ecosystem you’re left with nothing (or in a worst-case scenario the game can change the rules, take your winnings, and do many other things since these assets never belonged to you). Blockchain-based games make them more open and allow players to have actual ownership themselves.

Time will tell, but we have exciting times ahead. NFTs and Play2Earn are much more than “Crypto” trends. They are truly global “Consumer” trends. We saw it in the Philippines, Brazil, Venezuela, and others where users who never used crypto or heard about blockchain before were onboarded because they simply wanted to play a game where they can actually earn income.

Play2Earn is probably one of the next major gaming models, and mostly because it brings extra liquidity to assets that were previously highly illiquid (in-game assets). All of this will change long-term through blockchain and NFTs, and it will be interesting to see how the mindset shifts over time as these games become more and more popular.

In closing, we will leave you with this thought:

If there are games that reward you with assets that are tradable and valuable in the real world… Why would you play a game that doesn’t?

Of course, you can! At BEPRO Network we build tools for builders and help ambitious individuals and teams speed up their idea development. We recently released our NFT Factory into our codebase which allows you to easily build NFT-based applications. Start here: http://docs.bepro.network